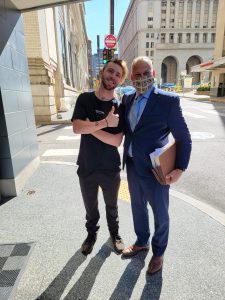 Attorney Thomas Will was victorious in getting a not-guilty verdict while representing A.S. in a Non-Jury Trial in the Allegheny County Courthouse on September 30, 2021.

In response, Attorney Will filed a pretrial motion in the form of a Petition for Writ of Habeas Corpus. A Petition for Writ of Habeas Corpus is essentially a way of arguing to the Common Pleas judge that there is a problem with the charges, and that the charges should not have been moved from the Magistrate level to the Court of Common Pleas level.

The Court was scheduled to proceed with a Hearing on the Petition for Writ of Habeas Corpus, but prior to doing so, the Commonwealth withdrew all of their Felony charges against A.S. With the Felonies out of the way, the parties proceeded to a Non-Jury Trial.

The Court ultimately found A.S. not guilty on all remaining charges.

Attorney Will was very happy to have obtained this result for a deserving young man who happened to be at the wrong place at the wrong time. If you have been in a similar situation, give the law offices of Thomas A. Will & Associates a call today.